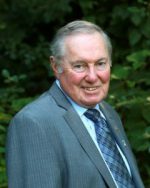 The Association of Fundraising Professionals (AFP) has bestowed the Barbara Marion Award for Outstanding Leadership to AFP, the association’s highest volunteer and leadership recognition, to James (Jim) Allen of Toronto, Ontario. AFP is the largest association of fundraisers in the world, and the award is named for Barbara Marion, ACFRE, the first woman to chair both AFP and the AFP Foundation for Philanthropy boards of directors. The Barbara Marion Award is given to a leader in the fundraising profession who has worked on the local, regional, national, and international levels of AFP to help build, advance, and promote the association and the fundraising profession. “Barbara Marion was a professional colleague whom I greatly admired and respected,” said Allen. “She was a true pioneer in the history of NSFRE and AFP, and I am humbled and honored to receive this award in her memory.”

Allen, currently philanthropy officer for The Living City Foundation, has been in fundraising since 1970 and has been a member of AFP since 1980, serving in a variety of leadership positions and remaining a staunch champion for continuing education, certification, and research.

Allen has been involved in the formation of two AFP chapters, serving as a founding board member of both the Greater Cleveland Chapter in 1980, where he served as president from 1982-1984, and then the Greater Toronto Chapter in 1994, where he served as secretary, which is now the largest AFP chapter in the world with over 1,200 members. He served on the board of AFP (then known as the National Society of Fund Raising Executives) from 1980 – 1984, as well as in 2011. Additionally, he was instrumental in the development of the Greater Toronto Chapter’s Fundraising Day and Fundraising Congress, having co-chaired the first two Fundraising Day Committees in the mid-1990s, and served on the Congress Committee for several years when it was first created.

Allen was one of the first fundraisers in the world to receive the Certified Fund Raising Executive (CFRE) credential as part of the inaugural class in 1981. He was recognized in 2006 as one of only 22 fundraisers to maintain their certification for the first 25 years of the credential’s existence. He later earned his Advanced Certified Fund Raising Executive (ACFRE) credential in 2004, being the fourth Canadian and one of 110 fundraisers around the world to possess that credential. He then served on the ACFRE Board, from 2009 – 2012, chairing the ACFRE Board in 2011.

“Jim has been a true pioneer for the profession and has made such an extraordinary, long-lasting impact on AFP—internationally, across Canada and in the chapters where he has served,” said Ann Hale, CFRE, chair of AFP, “He’s been one of the greatest advocates for certification and continuing education, and all of us at AFP are so excited to be able to recognize him with the Barbara Marion Award.”